Pop culture seems to be endlessly fascinated with the “big three” of horror, werewolves, vampires, and zombies. I am starting a three-post series which will go over the occult roots of each and the modern day encounters with the various creatures of darkness. I’m starting with werewolves.

Werewolves, the man-wolf creatures of the night, said to terrorize townspeople and consume children and sheep. Werewolves are considered to be a strictly European notion, but most cultures around the world have some concept of people transforming into animals, in the Southern United States it’s the skinwalkers, in Japan, the kitsune, and in Mesoamerica, the nagual. Stories of these shapeshifting creatures are abundant, and many continue today.

The official term for shapeshifting into a wolf is lycanthropy. Many attribute legend of werewolves to people who had the mental disorder known as Clinical Lycanthropy, a form of psychosis in which one believes themselves to be a wolf or half-wolf.

Probably the best known tale of a werewolf are the stories of the Beast of Gevaudan. Gevaudan was the name for a mountainous region in the southern part of 18th century France. The Beast showed up in June of 1764 and terrorized the small town for three years. It killed women, children, livestock–anything it could. Eventually, nearly all of France had heard of the beast, and the king sent soldiers down to kill the creature. The soldiers succeeded in killing the beast and tried to bring it back to the king but because of decay and stench they buried it in an unknown location. Many speculate that the creature was just a hyena or an oversized wolf, but there are some who still call it a werewolf.

There is an abundance of modern werewolf sightings, not just in Europe, but in America as well. Researcher Linda S. Godfrey is the recognized expert on modern werewolf sightings and has a nearly complete list of modern American encounters. She has noticed, like many cryptids, there seems to be a correlation between sighting locations and the locations of both sacred sites and military bases. Godfrey speculated that this could be because the man-wolves are protection spirits from Native American mythology. Godfrey prefers to call these creatures Dogmen or Upright-Candids, because some encounters seem to attribute a more dog-like appearance to the creatures than wolf-like. Many researchers also feel that the Dogmen are most supernatural than natural, due to the nature of many encounters. Nearly everyone agrees, though, that werewolves aren’t truly men transforming into wolves. 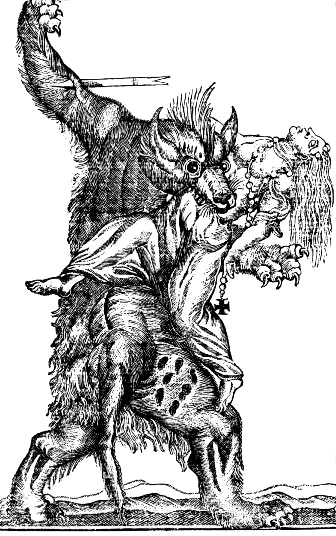 Encyclopedia of Occultism by Lewis Spence